You will be able to find Gina’s first footworship ever at www.firsttimefootgirls.com or by clicking her photo above! You can find out just how ticklish soles at www.hardcoretickling.com & tons more from Gina West at JWTies.com or by clicking the banner below! 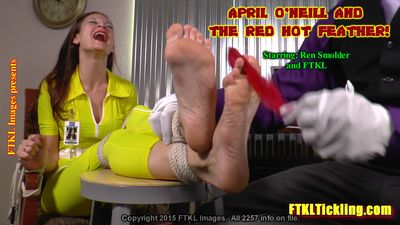 THIS IS A CUSTOM ORDER: Nosy Channel 6 News reporter, April O’Neill (Ren Smolder) has stumbled onto the story of a lifetime! She snoops around gangster Don Turtelli’s (FTKL) office and discovered some very incriminating evidence that could put him away forever! Unfortunately, he also discovers her and takes her captive!

Soon, April is de-booted and tied up. Turtelli knows that she’s found out about his scheme to steal the priceless Phoenix Feather, but the deed is already done! Turtelli already has the dreaded feather and intends to use it on April! The feisty reporter thinks she can resist, but as soon as the crimson quill brushes her squirming, bare soles she howls with helpless laughter!

April thrashes in a foot-tickled conniption, as her long toes twitch, wriggle and writhe and her long soles flex and scrunch, uncontrollably! In no time, the howling, laugh-addled hottie is giving up info … not only about her expose’ on him, but about her personal life, as well! The tickling is agonizing and the feather seems to work like a magical truth serum! What secrets will April spill? Will justice meet a feathery de-feet? Find out now, in this customer-written tickling homage to a longtime favorite cartoon, amongst tickle fans! (Quicktime) Want your own custom vid? Email us now!