Maddy Rose has some very tiny feet and when Camille discovers they’re smaller than hers she has to see for herself. After removing Maddys sock and taking a big sniff Camille compares their feet side by side. Camille grabs both Maddys feet and begins to worship them before discovering how ticklish Maddys feet are. Camille licks and tickles them until she can’t hold her down any longer.

Check it out on First Time Foot Girls Today

I’m bound to the table at your request and my feet are at your mercy. You know how ticklish my feet are so it is my pleasure to let you tickle them. Your fingers dance across my soles making me laugh and squirm but you keep going. Enjoying my reactions you move to my toes and heels really getting me squirming all over the place. Tickle me again soon sir!!

I caught my Step Dad smelling my shoes yesterday. It is really disgusting and my Mom is going to catch on. She’s going to divorce him, unless I help him out. I’ve had my eye on this new designer purse and he’s going to get it for me. My Mom must not have nice feet, so he can lick my feet if he will buy it for me. I’ve been walking around all day in my sandals and my feet are nice and sweaty. Wonder what my Mom would do if she walked in and caught us. As I put my feet in his mouth and he licks all the dirt off, I dream about my purse. I’ve never met anyone so disgusting! He does give a good foot cleaning. I won’t tell my Mom as long as I get that designer purse.

Check out all the hot foot fetish clips at MIAMI BRATS today!!!

From time to time I actually enjoy having my feet tickled and today is one of those days. I wish you were here to lightly tickle my soles and toes…… yeah just like that.

19 year old Renee Marie came in for an interview and when Zoey discovered her feet were virgins she had to take full advantage. She removes Renees sandals and lightly tickles her feet making her giggle. Zoey runs her tongue from Renees heel to her toes and after that Renee let her do whatever she wanted to her feet including tickling.

Poison Ivy has broken into a home to find out a secret internet code to take over the world of the interwebs. But Robin has come to save the world and stop Ivy. Ivy is too quick and blows her magical dust into her face to make her weak and to make her fall completely mindless and under Ivy’s control. She makes Robin become her foot slave and promise to do her evil bidding. She’s hers forever! 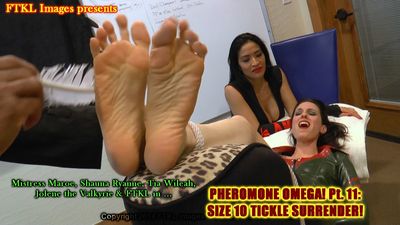 General Gambel eventually awakes, tied to her shoe chair, with her feet in the air! Her long, beautiful, size 10 soles are helplessly displayed in front of the Ticklante! He sends her into frantic fits of laughter as he tickles her big feet! Feathers and fingernails ruthlessly reduce the big, bad villainess into a cackling, screaming (and very compliant) tickle prisoner!

Long, agile toes wriggle and writhe, as General Gambel reveals the function and antidote for the dreaded Pheromone Omega! But, it may already be too late to stop it from being loosed on the city!

Enjoy the foot-tickled anguish of yet another super-sexy domme, in the final episode of this series!

Tiny Jennifer Bliss is barely 4’10 and has size 3 feet. When she told me she had never had them licked I had to be the first. After I pulled off her socks and my tongue hit her tasty soles I discovered they were really ticklish too. Her feet were so tiny they were easy to fit in my mouth and with her being so small she couldn’t escape the tickling either.

I’ve been walking all day at the mall. My tiny little size 5 feet get really stinky in these socks too. I want you to worship and sniff every inch of them from heel to toe like a good little foot slave should.